I had a true day off last Friday. (Wife at work & kids at school) so I went for a 7 hour solo ride up to a little island in northern Nagasaki prefecture called Ikitsuki Island. Here’s a link to the Google Map. I took the “Alternate route” there and back to get up north rather than the much longer southern loop over the peninsula.

It was great being out, but the weather was sunny & hot. (35C / 95F and about 75% humidity) I wore my Hyod mesh jacket & pants. They are a lot hotter than my cheap Honda jacket & jeans. Since I was looking forward to burning off some stress, I wore the full get-up.

Somewhere around half way there though, I found a speed trap. Or rather it found me. Never even saw the guy with the radar gun. The speed limit was posted as 50Kmh (31mph) and they got me doing 76 (47mph) so I was 26Kmh over. At 30Kmh over, they suspend your license! Man, it was hard not sweatin it till the guy said what they had me at. I was pretty sure I hadn’t hit 80, but I was pushing a bit after having just passed a bunch of cages at a light. Anyway, that upped the price of my ride by 15,000 yen (About US$192 at current exchange rates.

I tell ya, the speed limits in this country drive me frakin nuts!!!! The fastest you can drive on ANY road in Japan is 60Kmh (37mph) and the highway is 100Kmh (60mph). (The second reason I would never buy a bigger bike here.) Look at the picture, you think you could keep it under 31mph on that lovely stretch of asphalt?

Well, I didn’t want to ruin my ride, so I decided to make the most of it and practice starting my cornering later and just enjoy the view. (Of course I still HAD to open the throttle a bit whenever I was pretty sure there was no one around.)

The bike is running good, I think I’ve got the map pretty damn close. I still wonder if my target AFR are too extreme, but it’s damn near impossible to get any comment on FI mapping on this forum. (Yes, I’m fishing for comments. – See PDF’s here.) Where are all the European riders going anyway? They don’t use forums?

Anyway, I made it to Ikitsuki (in the pic) and had a great bowl of Ramen with some Gyoza (little fried pork dumplings). My bike handled great, getting 31.41 km/l (73.8 mpg). Probably because I was taking it easy after the ticket, but still pretty good. I was able to learn a few things and pick up on a few things I want to work on before I hit the track next month. 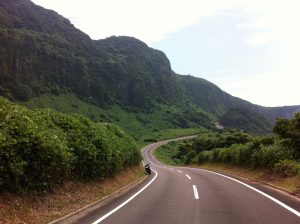