So, I’d like to introduce you to Red, my Yamaha SRV250.  This old timer was my first bike and helped me fall in love with the wind in my face and the adrenaline in my veins. 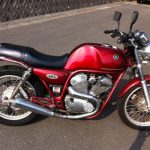 The SRV250 is an almost Cafe racer that was sold here in Japan (obviously) and Australia, but not in the U.S. This is one of the originals (circa 1992), before they came out with a “standardized” version called the Renaissa.  When’s the last time you saw a V-twin dual exhaust 250cc bike?

There’s a big market here in Japan for 250cc bikes because anything under 250cc doesn’t require an expensive mechanical check-up (a shaken) every 2 years.  You have to keep your bike within certain specs to pass the shaken, so if you’re on a 250, you can do whatever you like, without having to take it back to stock every 2 years.

I bought this beauty off of Yahoo Auctions for 90,000 yen (about US$900) in pretty decent shape.  The oil seals were leaking on the front forks, and since there were some rust spots on them, I had them just replace the pipes.  I’ve also replaced most of the rubber hosing that was cracked, including the intake boots between the dual carbs and the cylenders (intake manifolds.)  Other replacements I’ve made are: the chain, the rear tire, and the battery.  I screwed up on the battery and just got the cheapest thing I could find.  It died within a couple months and won’t even take a charge.

So, what I want to do now is fix this classic up and make it beautiful again.  I plan on restoring it, but not keeping it all stock.  I don’t want to make it a full-on Cafe racer, but would like it to handle a bit better at speed.  A list of repairs I want to do goes something like this:

New battery
Rear suspension (won’t be stock, as I want to stiffen it up a bit)
High performance suspension oil in front
New brake pads front & back
Either repair or replace the dented gas tank (not a big dent, but there nonetheless) New Gauge cluster (could be a rebuilt original)

I also want to shine it up, getting rid of all the rust spots and the crappy “chrome” paint that the previous owner put on the engine and the wheels.  It’s a job that will likely take years, but I’m excited about being able to tinker make this old and now relatievely rare bike a beaut once again.